The Salt Path is 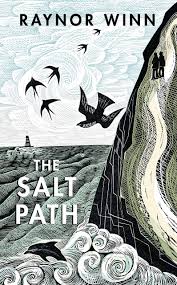 an honest and life-affirming true story of coming to terms with grief and the healing power of the natural world. Ultimately, it is a portrayal of home, and how it can be lost, rebuilt, and rediscovered in the most unexpected ways.

Without a home, and facing terminal illness, Winn and her husband decided to walk the South West Coast Path. She talks about the experience – and her Costa-nominated memoir, The Salt Path

On a Thursday afternoon in August 2013, Raynor Winn and her husband, Moth, set off from Minehead in Somerset to walk the 630-mile South West Coast Path. She was 50, he was 53. They had a tent bought on eBay, a couple of cheap, thin sleeping bags, £115 in cash and a bankcard with which to draw out the £48 a week they were due in tax credits. They were broke and broken.

Through a combination of bad decisions and bad luck – a friend who turned out not to be a friend, and a toxic investment – they had lost the farmhouse that was their home and their source of income – renting to holidaymakers. It was also the place where their children had grown up and to which they returned during university holidays.