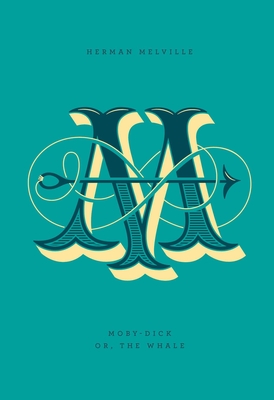 It all begins with a letter. Fall in love with Penguin Drop Caps, a new series of twenty-six collectible and hardcover editions, each with a type cover showcasing a gorgeously illustrated letter of the alphabet. In a design collaboration between Jessica Hische and Penguin Art Director Paul Buckley, the series features unique cover art by Hische, a superstar in the world of type design and illustration, whose work has appeared everywhere from Tiffany & Co. to Wes Anderson's recent film Moonrise Kingdom to Penguin's own bestsellers Committed and Rules of Civility. With exclusive designs that have never before appeared on Hische's hugely popular Daily Drop Cap blog, the Penguin Drop Caps series debuted with an 'A' for Jane Austen's Pride and Prejudice, a 'B' for Charlotte Brönte's Jane Eyre, and a 'C' for Willa Cather's My Ántonia. It continues with more perennial classics, perfect to give as elegant gifts or to showcase on your own shelves.

M is for Melville, who wrote of his masterpiece, "It is the horrible texture of a fabric that should be woven of ships' cables and hawsers. A Polar wind blows through it, and birds of prey hover over it." In part, Moby-Dick is the story of an eerily compelling madman pursuing an unholy war against a creature as vast and dangerous and unknowable as the sea itself. But more than just a novel of adventure, more than an encyclopedia of whaling lore and legend, Moby-Dick is a haunting, mesmerizing, and important social commentary populated with several of the most unforgettable and enduring characters in literature. Written with wonderfully redemptive humor, Moby-Dick is a profound and timeless inquiry into character, faith, and the nature of perception.

HERMAN MELVILLE was born in August 1, 1819, in New York City, the son of a merchant. Only twelve when his father died bankrupt, young Herman tried work as a bank clerk, as a cabin-boy on a trip to Liverpool, and as an elementary schoolteacher, before shipping in January 1841 on the whaler Acushnet, bound for the Pacific. Deserting ship the following year in the Marquesas, he made his way to Tahiti and Honolulu, returning as ordinary seaman on the frigate United States to Boston, where he was discharged in October 1844. Books based on these adventures won him immediate success. By 1850 he was married, had acquired a farm near Pittsfield, Massachussetts (where he was the impetuous friend and neighbor of Nathaniel Hawthorne), and was hard at work on his masterpiece Moby-Dick. But literary success soon faded; his complexity increasingly alienated readers. After a visit to the Holy Land in January 1857, he turned from writing prose fiction to poetry. In 1863, during the Civil War, he moved back to New York City, where from 1866-1885 he was a deputy inspector in the Custom House, and where, in 1891, he died. A draft of a final prose work, Billy Budd, Sailor, was left unfinished and uncollated, packed tidily away by his widow, where it remained until its rediscovery and publication in 1924.
JESSICA HISCHE is a letterer, illustrator, typographer, and web designer. She currently serves on the Type Directors Club board of directors, has been named a Forbes Magazine "30 under 30" in art and design as well as an ADC Young Gun and one of Print Magazine’s "New Visual Artists". She has designed for Wes Anderson, McSweeney's, Tiffany & Co, Penguin Books and many others. She resides primarily in San Francisco, occasionally in Brooklyn.

Winner of the 2012 Fifty Books/Fifty Covers show, organized by Design Observer in association with AIGA and Designers & Books

"[Penguin Drop Caps] convey a sense of nostalgia for the tactility and aesthetic power of a physical book and for a centuries-old tradition of beautiful lettering."
—Fast Company

"The Penguin Drop Caps series is a great example of the power of design. Why buy these particular classics when there are less expensive, even free editions of Great Expectations? Because they’re beautiful objects. Paul Buckley and Jessica Hische’s fresh approach to the literary classics reduces the design down to typography and color. Each cover is foil-stamped with a cleverly illustrated letterform that reveals an element of the story. Jane Austen’s A (Pride and Prejudice) is formed by opulent peacock feathers and Charlotte Bronte’s B (Jane Eyre) is surrounded by flames. The complete set forms a rainbow spectrum prettier than anything else on your bookshelf."
—Rex Bonomelli, The New York Times