The Round House: A Novel (Large Print / Paperback) 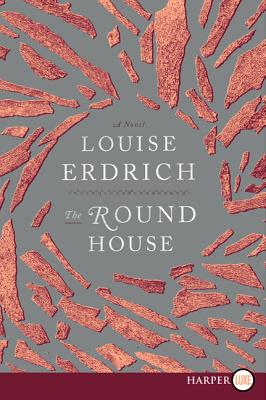 “When 13-year-old Joe's world is shattered by a horrific crime perpetrated against his mother, he seeks to right the wrong. Erdrich masterfully lets the reader experience this period in Joe's life through his eyes. His world is drawn with sure strokes, and his family and their traditions and his friends and their exploits are convincing and real. Erdrich offers a view of life on an Ojibwe reservation as alternately rich in culture and disheartening in its injustice, poverty, and disrespect. Compelling and immediate, The Round House is a mesmerizing book.”
— Jenny Lyons, The King's English, Salt Lake City, UT

The Round House won the National Book Award for fiction.

One of the most revered novelists of our time—a brilliant chronicler of Native-American life—Louise Erdrich returns to the territory of her bestselling, Pulitzer Prize finalist The Plague of Doves with The Round House, transporting readers to the Ojibwe reservation in North Dakota. It is an exquisitely told story of a boy on the cusp of manhood who seeks justice and understanding in the wake of a terrible crime that upends and forever transforms his family.

Riveting and suspenseful, arguably the most accessible novel to date from the creator of Love Medicine, The Beet Queen, and The Bingo Palace, Erdrich’s The Round House is a page-turning masterpiece of literary fiction—at once a powerful coming-of-age story, a mystery, and a tender, moving novel of family, history, and culture.

Louise Erdrich, a member of the Turtle Mountain Band of Chippewa, is the author of many novels as well as volumes of poetry, children’s books, and a memoir of early motherhood. Her novel The Round House won the National Book Award for Fiction. Love Medicine and LaRose received the National Book Critics Circle Award for Fiction. Erdrich lives in Minnesota with her daughters and is the owner of Birchbark Books, a small independent bookstore. Her most recent book, The Night Watchman, won the Pulitzer Prize. A ghost lives in her creaky old house.

“Wise and suspenseful…Erdrich’s voice as well as her powers of insight and imagination fully infuse this novel…She writes so perceptively and brilliantly about the adolescent passion for justice that one is transported northward to her home territory.”
— Elizabeth Taylor, Chicago Tribune

“Erdrich has given us a multitude of narrative voices and stories. Never before has she given us a novel with a single narrative voice so smart, rich and full of surprises as she has in The Round House…and, I would argue, her best so far.”
— NPR/All Thing's Considered

“THE ROUND HOUSE is filled with stunning language that recalls shades of Faulkner, García Márquez and Toni Morrison. Deeply moving, this novel ranks among Erdrich’s best work, and it is impossible to forget.”
— USA Today

“Emotionally compelling…Joe is an incredibly endearing narrator, full of urgency and radiant candor…the story he tells transforms a sad, isolated crime into a revelation about how maturity alters our relationship with our parents, delivering us into new kinds of love and pain.”
— Ron Charles, Washington Post

“A gripping mystery with a moral twist: Revenge might be the harshest punishment, but only for the victims. A-”
— Entertainment Weekly

“Moving, complex, and surprisingly uplifting…likely to be dubbed the Native American TO KILL A MOCKINGBIRD”
— Parade, Fall's Best Books

“Erdrich never shields the reader or Joe from the truth…She writes simply, without flourish.”
— Philadelphia Inquirer

“An artfully balanced mystery, thriller and coming-of-age story…this novel will have you reading at warp speed to see what happens next.”
— Minneapolis Star Tribune

“THE ROUND HOUSE is a stunning piece of architecture. It is carefully, lovingly, disarmingly constructed. Even the digressions demand strict attention.”
— Newsday

“One of the most pleasurable aspects of Erdrich’s writing…is that while her narratives are loose and sprawling, the language is always tight and poetically compressed…In the end there’s nothing, not the arresting plot or the shocking ending of THE ROUND HOUSE, that resonates as much as the characters.”
— San Francisco Chronicle

“Joe may be one of Erdrich’s best-drawn characters; he’s conflicted, feisty one moment, scared and disappointed the next. THE ROUND HOUSE will inevitably draw comparisons to Harper Lee’s TO KILL A MOCKINGBIRD…”
— Miami Herald

“A sweeping, suspenseful outing from this prizewinning, generation-spanning chronicler of her Native American people, the Ojibwe of the northern plains...a sumptuous tale.”
— Elle

“Erdrich threads a gripping mystery and multilayered portrait of a community through a deeply affecting coming-of-age novel.”
— Karen Holt, O, the Oprah Magazine

“A stunning and devastating tale of hate crimes and vengeance…Erdrich covers a vast spectrum of history, cruel loss, and bracing realizations. A preeminent tale in an essential American saga.”
— Donna Seaman, Booklist, Starred Review of THE ROUND HOUSE

“The story pulses with urgency as she [Erdrich] probes the moral and legal ramifications of a terrible act of violence.”
— Publishers Weekly, Starred Review of THE ROUND HOUSE

“Erdrich skillfully makes Joe’s coming-of-age both universal and specific…the story is also ripe with detail about reservation life, and with her rich cast of characters, Erdrich provides flavor, humor and depth. Joe’s relationship with his father, Bazil, a judge, has echoes of TO KILL A MOCKINGBIRD.”
— Library Journal, Starred Review of THE ROUND HOUSE

“Riveting…One of Erdrich’s most suspenseful novels.... It vividly portrays both the deep tragedy and crazy comedy of life.”
— BookPage, Cover/Feature Review

“Each new Erdrich novel adds new layers of pathos and comedy, earthiness and spiritual questing, to her priceless multigenerational drama. THE ROUND HOUSE is one of her best -- concentrated, suspenseful, and morally profound.”
— Jane Ciabattari, Boston Globe

“While Erdrich is known as a brilliant chronicler of the American Indian experience, her insights into our family, community, and spiritual lives transcend any category.”
— Reader's Digest

“Poignant and surprisingly funny, it’s the acclaimed writer’s best book yet.”
— O, the Oprah Magazine, "Our Favorite Reads of 2012"